August 30, 2018
The most contentious point of evolution we observe today is that of our own species.  Many people refuse to accept that early hominids, 'primitive' humans, are primates.  Individuals fiercely preach that 'we as a species didn't used to be monkeys!'

When the word primitive is used as an adjective it frequently implies slow, ignorant, raw, primal, violent, and undeveloped..  This idea of primitive as a dirty slackjawed individual needs to be undone.  To restore dignity to 'primitive' we must take primitive out of the human context, provide a relevant timescale to understand evolution, and highlight how advanced early species were.

A primitive dolphin was an ancestor to modern day dolphins.  We know dolphins to be intelligent, social, and agile predators.  They are capable of complex emotions, self recognition, and cognitive thought.  An early dolphin would have been a predator, and hunting requires certain physiological characteristics.  You have to be fast enough to catch your prey, able to communicate to and understand your pod, and able to eat and digest it underwater.  Early dolphins could have possessed the same social structures and been capable of complex emotions.  But, if the early dolphins, this more primitive species, were directly compared to their later ancestors they would have largely similar, but different set of genes (obviously).  They could be more genetically robust in certain physiological characteristics, and less diverse in others.

Over time, nature will pare down genes that are not selected for, and there will be physiological tradeoffs in terms of expression that allows some characteristics to be more fully expressed at the expense of others.  So, modern dolphins may have a larger cerebral cortex, and even smaller vestigal hind limbs, than their primitive counterparts, but they are not inherently more "advanced" - they are simply shaped by the manifest of time, chance, opportunity, and advantage to be the most well suited versions of a dolphin that they can be.  All the while, accumulating more random genetic mutations that will continue to keep them at a steady state-of-being in an ever changing environment.

Living bottlenose dolphins are descendants, great-great-grandbabies, of dolphins who were alive hundreds of years ago.  A mutation can occur in any egg or sperm that will result in a baby dolphin that's slightly different than its parents.  Lets say a mutation gives a physiological advantage to the Baby dolphin - NOT making the dolphin smarter, or faster, or stronger - but altering a gene that allows certain proteins to withstand warmer temperatures without becoming denatured.  Said baby-dolphin has a selective advantage, and that dolphin will likely have more offspring that survive to have their own children, due to warming ocean conditions.  The descendants of baby-dolphin will have this advantageous mutation.  Within a few generations, all the dolphins without this mutation don't have successful offspring because they can't physiologically survive in the warm ocean conditions.

Diverging from Dolphins, to all other species, we see additional complexities added to the genome with time.  And, we see loss of genetic diversity.  Its an ever changing scale that is directly related to the relationship of one species with where it falls in this time, chance, opportunity, and advantage matrix.  Each species exploits a given niche, and no one is more or less perfectly suited than it could ever possibly be, save its offspring in a slightly altered matrix. 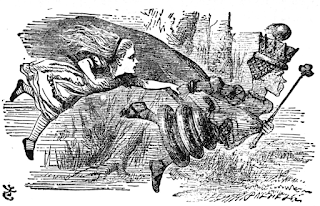 We owe a toast to our ancestors, from the first bony fishes, to the first mammals, for falling exactly where they did into each moment, and each phase of genetic change, that allowed the outcomes we so greatly take advantage of today.

Primitive does not mean less intelligent. Less present - maybe - but let's refute the negative connotation. It means earlier in history.  It means predecessor - and who is to say that the advances of our predecessors are any less significant in the context of the time.  The use of tools.  The study of astronomy and the universe, development of the calendar, and mathematics.  Each was momentous, early, primitive, and imperative to you and I being suited to succeed in our environment today.  We are our great-great-grandchildrens' primitive ancestors.  So don't knock the primitive.

Get ready to learn some basic taxonomy, and characteristics of everyones favorite furry friends.... spiders!! Just kidding, I know they're not a favorite. But they are very interesting.  We'll get into some fun tidbits on what makes a spider a spider, and how and why they dance!  Till the post is ready enjoy this spider.. with a "hat".
Read more